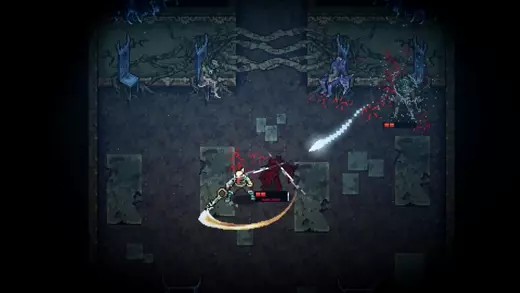 There Is No Light is a difficult top-down 2D action adventure game, which gets an alpha demo you can download over at its itch or Steam page, that’s being developed by Zelart.

Set in a grim underground world that is controlled by a new and mysterious religion, the Church of the “Great Hand”. Focused on an aggressive fighting style, you’ll be plunged into an experience that keep you on your toes, as mistakes are deadly when you go head first fighting various enemies and deadly bosses, and as you do damage to your aggressors, and even the environment, it would build up your” Rage” and execute on your special abilities to use in battles for that extra edge.

Plunge into a reality where the entire human population has been eradicated by a global catastrophe. Battle your way through bloodthirsty demonic forces to bring order to the world… Or become the herald of its destruction!

If you enjoyed playing the demo, and would like to see the game get fully developed and released in the future, then make sure to help out where you can over at its Kickstarter funding campaign page, in which they’re trying to reach their funding goal of $30,000, with a planned released date of Q3 2021 for the PC, PS4, Xbox One and Nintedo Switch.

You can also gain access to the game’s future alpha and beta builds, as soon as they’re made available, if you back at the “Rogue” $45 tier or higher.