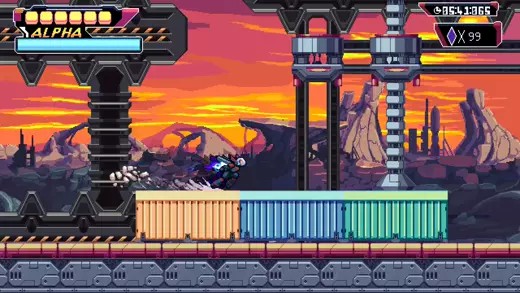 Starbuster is a 2D sci-fi fantasy action adventure platformer, gets an alpha demo downloadable over at its social post, a game developed by Helmet Productions .

There isn’t much info about the game yet, but you play as one of two characters with different play-styles, where the one named Alpha is extremely fast with their rocket boosters, as well as extremely deadly with its laser sword combined with its charge shot, and the other is called Cassie, an agile one that uses a grappling hook to get around, as well as having an energy gun to shoot down enemies for long-ranged attacks, or to rely on rocket-power punches.

The game reminds us of the Mega Man series but on steroids, which is definitely an exciting welcome. You can follow the game’s development by checking out and following their social media Twitter account.