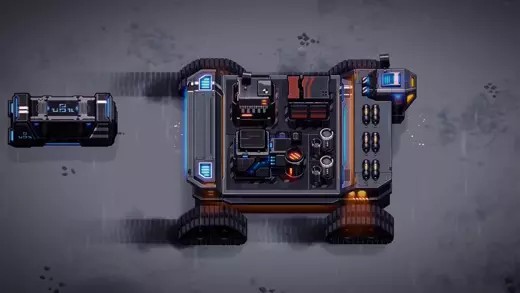 Sandship is a top-down free-to-play 2D factory management automation game, that has its beta downloadable over for mobile devices on Android and iOS. It’s being developed by Rockbite Games.

You take control of a giant AI factory that roams across an endless desert, in a world set in a post-apocalyptic sci-fi universe. In said mobile factory, you start building machines to harvest minerals to then pass them through other machines to process them and produce different types of materials, which would be used to trading purposes as well as finishing quests that would involve either upgrading your vehicle or factories, helping other robots you discover along your journey, or simply to get more money.

The more you progress through the game, the more story elements you uncover as well as the more machines you’d unlock to produce even more different types of materials, and transportation-focused types of machines. The more efficient you are with the placements of these machines and the design of your factory, the faster you’d be able to progress through the game. You’d obviously hit a limit though, since this is a F2P game after all.

And speaking of what the game is, there’d be timers where you’d have to wait until they’re done, but instead of turning off the game and waiting for them to be over, you can build a puzzle room and try to solve the puzzles presented to you, even creating your own puzzles and sharing it online for others to solve, as well as solving other user-generated puzzles/levels.

I always have an eye open for quality games on mobile, since they’re few and far between, and Sandship is definitely within that category as it delivers as it delivers on an adjective and fun gameplay mechanics and loop, pleasing visuals as well as going over the top and providing you with a single-player story experience on top of everything, giving you purpose alongside general enjoyment of just playing the game.

I’m still playing through the game, and somewhat in its early stages, but one thing that crossed my mind, is that I do hope it comes to PC and consoles at some point, to enjoy it on the big screen with more precise controls via keyboard and mouse / controller, as well as having it as a premium product on said platforms, to be sold as a commercial game with a modified progression system and the removal of F2P monitization elements. This simple desire definitely speaks to its quality for wanting it to be on other bigger platforms.