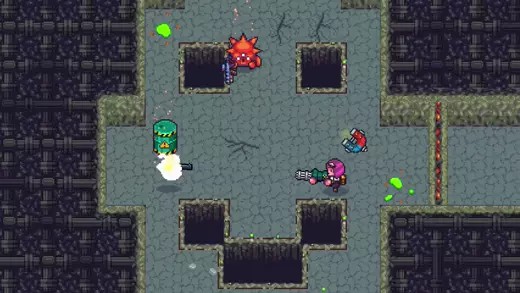 Rogue Star Rescue, a roguelite bullet hell tower defense game developed by Chuteapps, is in beta. The demo is available to download on it’s Itch page.

After it was known there was a huge Rogue Star on a direct collision path with our galaxy, leaders from all surrounding planets assembled the best team of fighters to stop it.

Choose where to start exploring in your galaxy, with a non-linear game path. You can choose who to rescue or make other decisions in the game. These choices you make will lead you to several different outcomes. For instance, you might all be consumed by the Rogue Star, or you might be sucked into a black hole, the possibilities are hilarious and so fun.

At the end of every level, you face off against a mini-boss and his minions. Strategically place several different traps and upgrade them to win the battle.

Pick from several heroes, each with unique abilities and their own backstory for saving their planets.

Discover over a hundred new items and weapons for you to unlock and use.