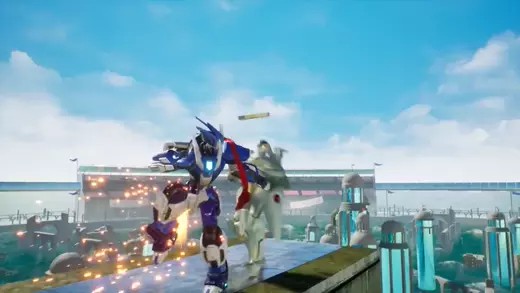 Override 2: Super Mech League was announced and you can sign up for their beta on its website. A third person online multiplayer mecha brawler, developed by Modus Studios.

You take can select from a variety of unique huge robots / mechs, each possessing their own playstyle and abilities, and you’d duke it out with other players in an online match.

Start as a new pilot and propel yourself through the ranks in a deep and robust Career Mode. Join Mech Leagues and earn reputation by competing in Arenas located across the globe. Duke it out with a tuned-up roster of returning robots and new mechs across various versus and co-op game modes of up to 4 players online and locally. Defeat your opponents using an arsenal of unique moves including super-charged ranged attacks, metal-busting combos, or an arena-shattering ultimate attack!

In this upcoming beta, which will happen from the 2nd of October til the 4th, on PC via Steam, you’ll have access to 20 mech fighters, to select and battle against other players in 1v1 or 2v2 matches, as well as a 4-player free-for-all and King of the Hill modes.

State-of-the-art opponents aren’t the only thing to worry about, though: arenas are speckled with game-changing hazards including pools of lava and geysers, so pilots would be wise to remain strategic while wreaking havoc on their surroundings.