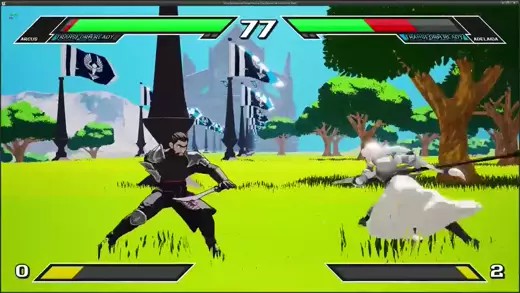 Origin of Storms is a face-passed fighting game set in a fantasy world, one that you can download its prototype over at its itch page, which is being developed by ArcForged, and one that’s inspired by Ultimate Marvel vs. Capcom 3 and Bloody Roar.

What’s interesting about OOS is that you can transform your fighter into a powerful elemental being, and in doing so changes the character’s stats for the better, from increased attack power or speed, as well as having their move-set changed when in that transformed state. Each character has their own unique transformation that differs from one to the other, resulting in a much more dynamic fighting game that can bring about an increased number of strategies, as such it requires decent skill to properly utilize its mechanics.

Currently, the prototype overs two playable characters, out of the planned ten, and each having their own unique transformation and elements, with arcade, versus and training modes, as well as online play through a service called Parsec.