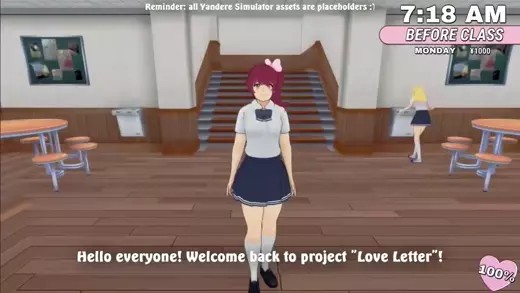 Lover Letter: My True Feelings, a third person anime-themed social simulation game where you play as a ‘yandere’ peprsonality character. Sounds familiar? Because there comes out as a result of the prolonged development of another popular game called Yandere Simulator, which is now around six years in-development.

The name of the game was called “Love Sick”, in reference to one of the name suggestions Yandere Simulator had previously, when it was thinking of changing its name, before it settled on the new name, as well as having its main playable character, which is the same character that used by its competitor, one that anyone can purchase from a marketplace and add to their game, getting scrapped for a new custom character.

The development of the game since its announcement is going extremely fast in comparison to its competitor, although one has to consider the different developer experience and talent behind Lover Letter, as well as having a foundation set (their competitor) to take reference from.

It’ll be interested to see how well both of these games do upon official commercial release. We’ll keep an eye on both of these games and inform you of any major news coming out of them, as well as any news released about Lover Letter having an alpha or beta test sign-ups / demos, if they’re even considering it.

For more information about the game, make sure to follow the game on its Twitter profile page.

Update: Love Letter: My True Feelings has been cancelled.