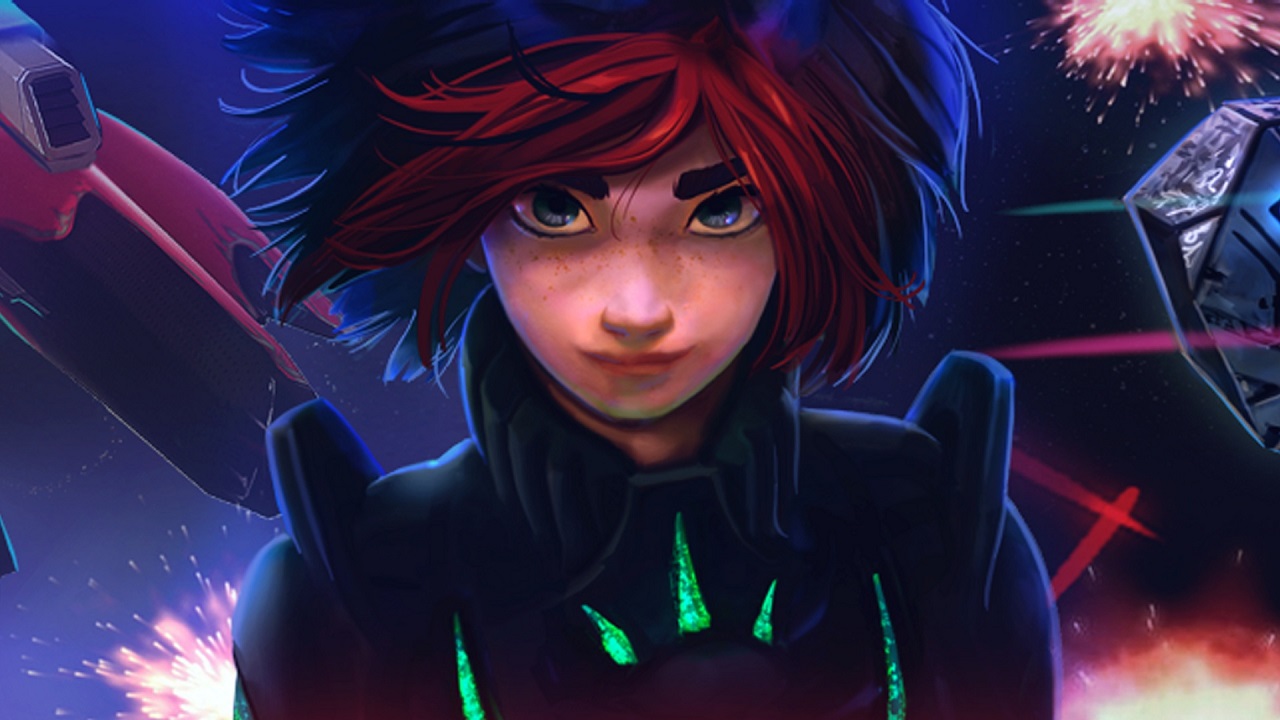 Note: This interview is from an old website under a different name.

We managed to have an interview with 2Awesome Studio that’s making Dimension Drive, a unique shooter with comic-like graphics and story-telling. Specifically we’re talking with the lead Developer Alejandro Santiago, or as they call him “Iron Man”. So let’s get on with the interview!

You guys, 2Awesome Studios, are making your first game Dimension Drive. What’s the studios’ history on how it came to be in relation to Dimension Drive?

Well the 2 studio founders and current members are David Jimenez and Alejandro Santiago. We both work at the European Space Agency as engineers since 2006 more or less. So yes, we are space engineers during the day, and game developers (our passion) during the night, our secret identity. Around the end of 2013 we came up with the idea of Dimension Drive (more on that below), and started developing the first prototype during 2014. We showcased the game at different game development conferences, and decided by the end of 2014 that we had a good idea in our hands, so we founded 2Awesome Studio officially. At the beginning of 2015 we teamed up with a talented group of artists and musicians to help us bring Dimension Drive to its full potential. That is more or less how 2 friends evolved from having a hobby / passion to developing our first commercial game.

What are you hoping for when people start playing and experiencing your game? An early alpha demo for the game is out, so you probably already had reactions, were those reactions in-line with what you hoped for?

The first experience we would like the players to have is “wow, this is not the typical shoot’em up, what… wait… I have to jump between both battlefields, this is crazy!!”. Usually when we have showcased before the game in several conferences that is one of the most repeated first reactions. We would say … is exactly what we are aiming for. Another typical reaction is “wow, it takes a few plays till you get use to the 2 screens mechanic”.

The game is very unique with its idea of going from one dimension to another, in a shoot’em up game. Where did this idea come from? Were there any inspirations or did the thought just came out of nowhere?

The idea came an evening where David and myself (Alejandro) were playing old shoot’em ups together and having some pizza + beers. At some point we ended up also watching some YouTube videos of Japanese playing these kind of games “hardcore” style. Meaning that we watched one guy playing 2 player mode, with 2 controllers just by himself. He was so amazing that he managed to dodge all bullets, kill enemies, and finish the level!!! Then we looked to each other and said … “let’s make a game with that mechanic”. Of course the first version was almost impossible to play, but we have been iterating from that original idea together with our community till the solid concept we have today.

The last tier in the game’s Kickstarter campaign is an interesting one, talking about how there is another alternative main character. Mind going into detail about it presuming someone pays/donate for it? Also, will that story appear at some point in the future after the game comes out if no one pays for it?

We have not written that story yet so I can’t go into much details. But the idea came after thinking: with all this dimensional travel could it happen that you arrive at a dimension that is really, really similar to yours? In that dimension another “you” would be there with a similar life only with some minor differences. That’s what we would like to explore. It’s an interesting story arch we think and we would like to make it but first we want to finish the main story. After the game is done who knows, if people want more and we can fund the development we could think about it.

We know that you’ve written in detail on how the main character of the game ‘Jack’ came to be, but what were the references and inspirations that you guys have taken from to make this character? Also, I’m a huge fan of Jack and her design, love it!

Thank you, we also love her! The creation of Jack has been a team effort. David thought of her initially, he wanted to create a powerful woman but nothing else was decided. We have been inspired by several other women in video games and sci-fi. For example, for her design we looked at Sarah Kerrigan, Samus Aran, Gamora and even Fem. Shepard from Mass Effect. However, there’s a key difference to all them, Jack doesn’t have any kind of superhuman powers. She is basically a regular woman, she has been pushed to the edge. Her family killed, her own planet and civilization obliterated. And instead of giving up and surrendering she has decided to fight back. And she has become the best at that. In that sense, we have taken inspiration from Ripley (Aliens) and Kara Thrace (Battlestar Galactica). They are also regular women that when presented with adversity are able to stand up to the challenge.

We’ve seen a glimpse of one of the boss fights that’s going to be in the game and it looked really cool. How many cool boss fight we’ll see in the game? Can you maybe give us a tease of how a different boss would fight?

We have planned at the moment 5 final boss fights (with some pre-fight before the real one). How these final bosses will come to be depends a lot on our players and backers. As you might know our kickstarter included a reward tier to help us design those final bosses (all 5 are already taken). Of course we have a general idea on how these bosses should be, but we will work close with those backers to improve and finalize the bosses’ designs. What we know for sure is that they will use a lot of the 2 battlefields mechanic as the one you can see in the kickstarter video.

The story/campaign approach you are going for with the game is this comic-book style of story-telling. Where did this idea came from? And just for the sake of asking, why not take the generic way of just showing a normal cut-scene?

We are trying to bring something new with Dimension Drive to the shoot’em up genre. But not only adding new gameplay mechanics like fighting two battlefields at the same time, or the energy concept. We also would like to tell the story in a more immersive way, so the player can really feel like he is the one saving our universe.

When the game is done, when it’s out and in the players hands with good polish and hopefully a good game, what kind of game will you make next after Dimension Drive? And just as a side question, if you were able to have a TV show for Dimension Drive, which actress would you want to play as Jack?

We haven’t think that far in the future yet to be honest. We have made some prototypes in the past that could make a good next game. Even expanding the Dimension Drive universe is an option, not necessarily with a shoot’em up game. We have plenty of ideas, but first we want to finish Dimension Drive as an awesome game, with the level of polish and perfection our players deserve. Thinking about which actress we would love to see as Jack, 2 come to our minds quickly, Kara Thrace for her role as Starbuck in Galactica and Rachel Nichols for her role as Kiera Cameron in Continuum.

The first time you guys had a Kickstarter to fund the game, you mentioned that it wasn’t going to hit its goal, but then the bad troll event happened and we all know it sucks. With it you guys got a lot of press covering your game and then after that you launched a second Kickstarter after a lot of demand. So my question is, do you think in an ironic sense that the one who ruined the first Kickstarter made the second Kickstarter a success because of all the coverage it received?

Yes and no. First we wouldn’t say that wasn’t going to hit its funding goal for sure. Of course we are aware that it was looking unluckily, with 3h to go and 7000 euros to raise. But as you know a lot of crazy things happen in Kickstarter over the last campaign hours. Unfortunately we would never know for sure after the troll event as you mention. Even if it is true that we got a lot of press coverage due to this unfortunate event, within the team we prefer to thank the community. It was them and not the troll who put us back on track, help us recover from that hard hit and come back even stronger than before. All the support we have received from everyone still amaze us, and it’s thanks to the community that this time we already cross the funding goal with more than 10 days to go.

The last question is, what kind of support we’ll get after Dimension Drive finally launches?

Once we will release the game on Steam and other DRM-free platforms, we will continue giving support to our players via “patch support” fixing bugs and implementing some minor enhancements. DLC / expansion we only foresee using them to expand Dimension Drive universe and adding new functionalities that could not be there by launch time. For example one of the stretch goals we have in our campaign, local 2 player mode. Of course those will be free DLC or expansion packs. About mod support, we will consider it after we have released the game as a way to expand the Dimension Drive Universe, but for the time being we prefer to concentrate our efforts in finishing the game.

Well that’s it for the interview. Thanks for 2Awesome Studio and Alejandro Santiago for talking and providing us with info on their upcoming game Dimension Drive, which is currently on Kickstarter and a few days away from ending. Check it out!