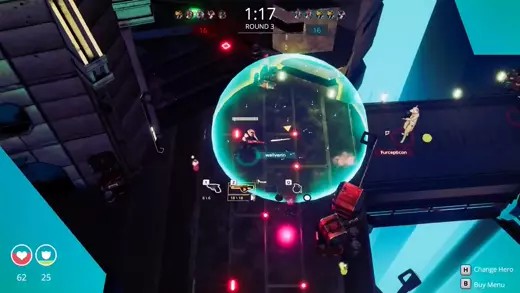 Update: The developers of HoverGrease has release a beta demo that you can download over at its itch page.

HoverGrease, a multiplayer top down  hero-shooter with a bio-cyberpunk theme developed by Altergaze, will be opening beta access in December 2020 for PC, and 2021 for consoles, and to get a chance at joining the closed beta, you can pledge $34 or more to their Kickstarter campaign to support the game and claim your spot!

The art style of this game is strongly influenced by 90’s shows like TMNT and X-Men and the game is set in a world where human-animal mutations are possible. Choose from 10 unique heroes, each with their own 18 distinct weapons, where you can either play in ranked or casual matches (both 5v5), or hop in co-op mode with your pals (1-6 players).

This game gives off the feeling of a MOBA, with its top down view and it’s team based combat, but also feels like a twin stick shooter with it’s fast paced arcade-like features.

If you would like a game that mixes traditional elements of an FPS, like counter-strike, team fortress and GTA, but also has more modern hero elements like Overwatch, Apex and League of Legends, you might enjoy this game!