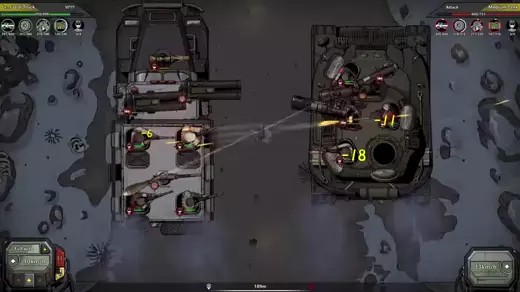 Home Behind 2 , a roguelike RPG set in a war stricken land, was developed by TPP Studio. The game is in alpha and the demo is available to download on it’s Steam page.

This game is a prequel to Home Behind, where we travel 10 years in to the past to a country named Scaria. Akadullah, an evil dictator, has been ruling the land of Scaria and the citizens have had enough. A civil war has been going on for 10 years and there are a group of revolutionary fighters on a mission to stop it and overthrow the current regime! .

Recruit guerilla fighters, each with their own skills, talents and stats, and train them so they get stronger. Choose a team of 4 to play as and assign different fighters to suit your playstyle.

With randomly generated areas of Scaria, and several different terrains for you to explore and adventure in, it is time to steal enemy oil fields and occupy cities in the name of the revolution.

Build a camp and upgrade it for the revolutionaries. Your camp is where you assign tactics, upgrade your technologies, cook food and craft armor.

There are hundreds of weapons to find, spanning several different eras, all the way back to World War II until modern times.