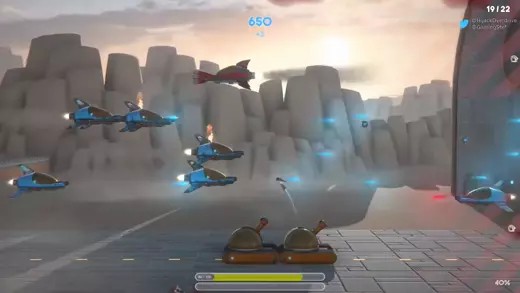 Hijack Overdrive is a side-scrolling 2D (perspective) action platforming shoot ’em up with a nice twist, which gets a prototype that you can download over at its Itch page. It’s being developed by Steven Craeynest.

The twist in this game is that rather than controlling one craft to move around and shoot enemies, you control a character where you’d hijack a bunch of flying crafts and on-ground vehicles like tanks, where they’d always keep shooting, and you have to platform from one vehicle to the other to re-position them for the most optimal assault. A mash up of the tower-defence and shmup genres. Using the enemies power against them!

You’re constantly on the move, stealing different vehicles, creating a small fleet on the fly, all while dodging enemy fire.