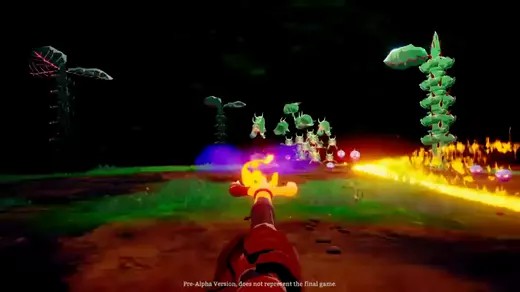 Hardest Harvest is a fast-paced first person arena shooter, which gets an alpha demo that you can download over at its Steam page. It’s being developed by Space Llama using the Unity engine.

You play as a farmer in this game, but you don’t farm, rather you fight for the hardest harvest you’ll ever have as you survive and shoot down an onslaught of corrupted creatures. Surviving long enough will have you battle against massive planet leaders, a boss fight if you will. You’ll also try to save friendly vegetables, where doing so would provide you with a temporary power up.

Tired of fame and realm-saving heroic quests, you decided it was better to retire from adventuring and lead a calmer life dedicated to farming. But peaceful times were not meant to last, as a rift bursting with foul energy split open the ground in front of your house, devouring the farmland and all of its inhabitants. Trusty pitchfork in hand, you get ready to dive for one more adventure, for what will become your Hardest Harvest.

The game definitely reminds us of Devil Daggers, but you’re a farmer instead with vegetables/plants as enemies. If you enjoyed playing the alpha demo, and would like to keep up to date with the game’s development, then make sure to check out and follow the developers’ Twitter account.