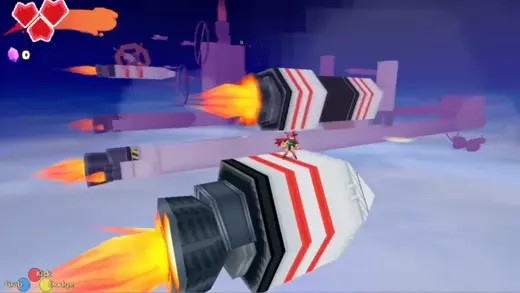 DoubleShake, a 2.5D action platformer inspired by 5th Gen platformers, that’s being developed by Rightstick Studios, is in alpha. The demo is available to download on it’s Itch page. It had a Kickstarter funding campaign, and thankfully it reached its goal!

You play as Loam who is originally enjoying her day on the beach when a loud bang nearby alerts her and she goes to investigate it. There she finds a crew of bandits who call themselves The Agents of Chaos. Now it’s up to you to find out what they are doing and stop them!

Grab pots and enemies and throw them to break obstacles or maybe do it just for fun! Use the Super Jump Pads to get thrown to a new location on the map or to swap perspectives of the camera.

You can shake a purple drink to let you fly to greater heights and reach platforms you couldn’t reach just from jumping. You can also shake up other things, including enemies, objects (in order to activate them) and other things that I don’t want to spoil.

There are also floating balls in the sky that you can grab on to and jump to either another ball or a platform. Watch out for the blue ones though as they fall down if you hold on to them for too long!

Kick anything to disarm enemies, or ricochet off of objects and walls. You can even kick just to break tons of things (because who doesn’t love that?). Loam’s kicks aren’t so powerful to kill off enemies but they can stun them which can be very useful!

Prepare yourself to fight several bosses. You will need to be strategic to correctly turn their attacks to counterattacks!