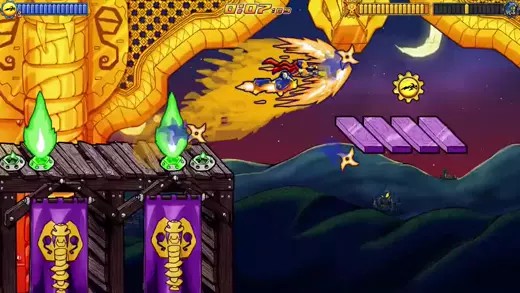 Bot Gaiden, a 2D multiplayer hack and slash platformer developed by SwordSwipe Studios, is in beta. The demo is available to download on its Steam page.

After Giorgio’s 6 Hench-bots stole the power skulls, ninja robots Robyu and Bytron had to act fast and retrieve them. The longer the skulls stayed in the possession of the Hench-bots, the stronger it made them and the more health they had.

The faster you try to reach the boss, the harder it is to dodge everything coming your way. Take it slow and fight a harder boss or rush it and fight an easier boss, take your pick!

This game can be played single player but you can grab a friend and play multiplayer together. The game is all about teamwork so if one player is lagging behind, they will get a speed buff. In addition, there is no need to fight over skill gears because if one person picks one up, both players will receive it! Skill gears are used for speed boosts and you lose them if you take damage.

Upgrades can be earned with faster finishes and include things like Triple Jump, Glider Bombs, Super Drill and much more!

To keep up with the game’s development, make sure to check out and follow the game / devs on Twitter.