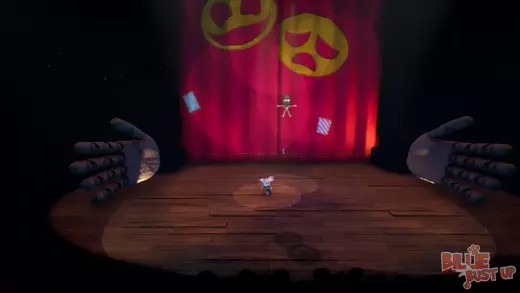 Billie Bust Up!, a 3D, musical, rhythm based platformer developed by Blueprint Games and inspired by Disney musicals, is on Kickstarter. The game reached it’s goal of $66,314 in 17 hours! You can download its pre-alpha demo on its Steam page, and get access to the closed alpha if you pledge £300 or more.

Our story begins when Billie learns that she has inherited some insane magical powers from her dad. Aristotle, the Axolotl, a wandering traveller versed in the ways of magic, decided to take her under his wing and teach her every spell he knows.

Billie can use a weak telekinesis spell to help her glide to the ground slowly with her umbrella wand. She can even turn the wand into a broomstick to float and avoid dangers on the ground like lava, quicksand, water and more. That’s not all! The umbrella can even create a shield around Billie to protect her from incoming damage. The shield has its own health bar and will regenerate health over time when not in use. When the umbrella is opened, water will rain down from the umbrella and can be used to turn lava into molten rock, put out fires and help grow seeds. In addition to these spells, Billie can go invisible for a short period of time and can use a strong telekinesis spell to grow wings and fly to greater heights and so much more.

With 4 major villain’s in the game, each unique and having their own music and areas, you’ll never get bored. The villain’s have their own gameplay experiences to keep things interesting and not repetitive. There are up to 15 unique songs by Daniel Ingram and the attacks move to the beat of the music. There’s even an optional sing along mode for every song!